Nearly 60 different types of fish found in Chicago waterways, study shows. 30 years ago, there were fewer than 10.

Amazing what can happen when a city stops dumping massive amounts of bleach into its waterways.

Nearly 60 different types of fish are swimming in the Chicago and Calumet rivers these days, up from fewer than 10 during the early 1980s, according to a new study of sampling conducted by the Metropolitan Water Reclamation District.

Common carp are still the species found most frequently by district biologists during their annual monitoring of the rivers and connected channels. Last year they pulled a nearly 40-pound carp swollen with eggs out of the Little Calumet River.

But since 2001, biologists also have found 19 other species in the waterways for the first time, only one of which wasn’t native to the area, the study found.

Among those netted were bluegill, catfish, largemouth bass and yellow perch — species less tolerant to pollution than carp that European immigrants deliberately introducedacross the nation during the 19th century.

More robust and diverse populations of fish — scientists call them assemblages — are examples of how a long fight to clean up the rivers is paying off after decades when regional leaders turned them into industrialized sewage canals. 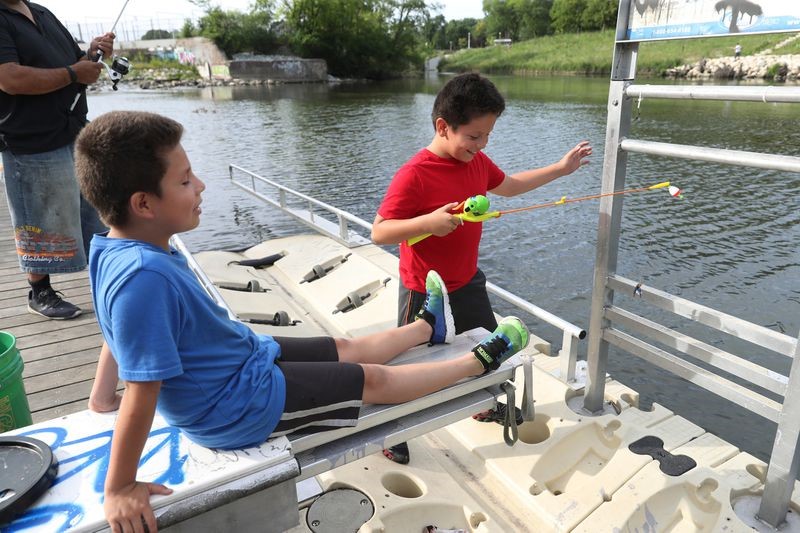 Jesus Garcia, 9, sits with his brother, Hector, 8, as they fish with their father, Jesus Garcia, at a boat launch in the North Branch of the Chicago River near Foster Avenue on July 31, 2020. (John J. Kim / Chicago Tribune)

“Actions we’re taking are working,” said Austin Happel, a research biologist at the Shedd Aquarium and chief author of the new study. “We’re already seeing that if you can increase fish diversity, you’re also able to increase how people use waterways.”

The most dramatic improvements in fish populations occurred after 1984, when the district that collects waste from Chicago and the Cook County suburbs stopped releasing sewage treated with germ-killing chlorine into local waterways.

Most other cities that rely on chlorine strip out the chemical before pumping treated sewage into rivers and lakes. Chicago skipped that step because for years its waterways were exempt from the toughest provisions of the Clean Water Act, a 1972 federal law that made it a national goal for all water bodies to be safe enough for fishing and swimming.

Two years before Congress overrode President Richard Nixon’s veto of the law, people snickered when Mayor Richard J. Daley said he wanted the Chicago River safe enough for office workers to fish for their lunch. “They can eat fish and have a bottle of beer,” the mayor told a congressional committee.

Few thought that would ever happen. Chicago had reversed its flow during the beginning of the last century and blasted through the subcontinental divide separating the Great Lakes and Mississippi River watersheds, literally walling off the city’s waste from its source of drinking water while linking two of the continent’s major shipping routes.

“The only time the river has a healthy color is on St. Patrick’s Day, when the Democrats dye it green with food coloring,” the sportswriter Rick Telender wrote in 1977.

A group of friends fish at a boat launch in the North Branch of the Chicago River near Foster Avenue on July 31, 2020. (John J. Kim / Chicago Tribune)

Daley and his allies secured billions of dollars set aside by Congress to clean up rivers and lakes. Much of the local share was earmarked for the Deep Tunnel, a $3 billion system of giant tunnels and reservoirs intended to prevent flooding and keep pollution out of waterways and Lake Michigan.

By the mid-1980s, the tunnels had helped reduce oxygen-depleting pollution in the waterways, and the district installed stations on the Cal-Sag Channel to aerate its once-sluggish current, making it more hospitable to fish and other aquatic life.

“Improvements definitely were more dramatic in those earlier years after the tunnels came on line and they stopped chlorinating,” said Dustin Gallagher, a district biologist who co-wrote the new study with the Shedd’s Happel. “Over the years we are seeing more bluegill and more largemouth bass and steadily larger game fish — all good signs.”

Providing suitable places for fish to reproduce and thrive remains a problem in stretches of local waterways that were dredged and lined with thick sheet metal a century ago, Gallagher noted. One potential solution came from biologists from the Shedd and activists who built floating, plant-filled structures in a lightly trafficked channel along Goose Island.

Other significant challenges remain. The Chicago Tribune has reported that billions of gallons of bacteria-laden sewage and runoff still routinely pour into local waterways during and after storms. District leaders have acknowledged that sewage dumping likely will continue across most of Cook County even after the last reservoir connected to Deep Tunnel is completed in 2029.

Chronic sewage dumping, referred to as “sewer overflows” by government officials, threatens the health of the river. Past studies have shown how sewage and other forms of pollution can suffocate fish by quickly reducing oxygen levels in water.

Ongoing abuse of local waterways also is a major reason why the amount of disease-causing bacteria in the water remains staggeringly high, even after the district began sanitizing sewage again.

Monthly testing reveals routine violations of water quality standards in stretches of the waterway that federal and state officials have declared should be clean enough to prevent kayakers, rowing teams and boaters from suffering diarrhea and other gastric ailments.

Along the Riverwalk at Wells Street, fecal coliform levels this year spiked as high as 51,000 colony-forming units per 100 milliliters of water — 255 times higher than the state standard of 200 CFUs. Bacteria levels at Wells have averaged 500 CFUs so far this year, district records show.

George Rodriguez, left, and Louie Franchi fish at a boat launch in the North Branch of the Chicago River on July 31, 2020. (John J. Kim / Chicago Tribune)

Just because the water might cause people gastrointestinal distress doesn’t make it harmful to fish.

Most of the fish in the Chicago River and its connected channels are safe to eat, though the state advises people to limit consumption of certain species to avoid highly toxic chemicals known as PCBs, another legacy from a century of industrial pollution.

Changing views about local waterways are perhaps best summarized by “The Jetty,” a section of the Riverwalk just west of Wells.

It features concrete and metal piers surrounded on two sides by floating gardens. You can walk to the water’s edge and cast a line in the shadow of Loop skyscrapers — four decades after the first Mayor Daley mused about it.

This article was originally published in the Chicago Tribune. 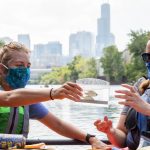