Along Salt Creek in west suburban Oak Brook, a dam built more than 150 years ago is at the center of a debate about how to preserve both history and the environment.

The dam, which once powered Graue Mill, a former grist mill that is a historic landmark, has drawn the ire of who say it is cutting off oxygen to fish.

Although the circumstances involving a historic landmark are unique, the debate about the ecological impact of dams has been taking place for years in the western suburbs.

Dams can raise havoc with fish habitat in several ways. By turning flowing rivers into pools, dams can affect mating and feeding habits of fish, restrict fish passage and cause sediment and algae to build upstream, reducing oxygen fish need to breathe.

In Naperville, the Forest Preserve District of DuPage County recently removed a waist-high limestone dam built in the 1930s at McDowell Grove that restricted natural river flow, creating a backup of sediment and blocking fish from traveling upstream. A similar dam farther up the river at Warrenville Grove will be torn down next year.

The DuPage River Salt Creek Workgroup is urging the forest preserve to consider changes to the dam near Graue Mill. The group has collected and analyzed two years of water-quality data in the Salt Creek Basin and found water upstream of the dam has some of the lowest biodiversity and dissolved oxygen levels.

In particular, the group found that native species such as northern pike and smallmouth bass had much larger populations downstream than upstream.

“We noticed a very steep drop-off in diversity of species of fish immediately upstream of the dam,” said Stephen McCracken of the DuPage River Salt Creek Workgroup.

But because of its historical significance, the group is trying to maintain as much of the dam’s structural integrity as possible.

The group has proposed two scenarios: One would be to lower the 6-foot-high dam about three feet and create a rock ramp so fish could pass. Another would be to remove a 20-foot section of the 130-foot-wide dam so water can flow around it.

Sandy Brubaker, executive director of the Graue Mill and Museum, said her biggest concern was how changes to the dam would affect the water wheel, which still turns today.

Built in the 1840s, the dam once powered a saw mill before creating hydropower for a grist mill built by German immigrant Frederick Graue in 1852 (this sentence as published has been corrected in this text).

The mill, also a site on the Underground Railroad, is listed on the National Register of Historic Landmarks and the Illinois Mechanical Engineering Landmarks.

“It was an industrial building; we want to keep that industrial look to the area,” Brubaker said. “Without the dam we’re kind of at a loss.” 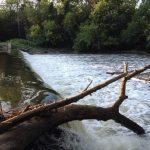