But the dam — next to the historic Graue Mill — is one of the most visited sites in the county, according to the Fullersburg Historic Foundation and often serves as a backdrop for wedding photos.

So the work group has enlisted Bluestem Communications, a nonprofit communications organization, to implement a public outreach plan to ensure residents and organizations have a chance to voice concerns, share ideas and help determine if and how the dam could be modified.

On Tuesday, the outreach plan was publicly reviewed by the Forest Preserve District of DuPage County, which owns the dam.

“We thought it was important to engage the public in this process,” said Erik Neidy, district director of natural resources.

Neidy noted that the earliest the dam modification could happen is in 2022. The outreach effort will take place over the next 18 months and include discussions with stakeholder groups, a survey and town hall meetings.

The Graue Mill dam was rebuilt in 1935 by the Civilian Conservation Corps.

If the dam is modified, the goal would be to increase dissolved oxygen levels and allow fish to travel upstream.

Still, it’s yet to be determined how the dam would be changed. One possibility could be to remove a section of the structure.

“It’s the forest preserve’s dam,” said Stephen McCracken, the DuPage River Salt Creek Workgroup’s project manager. “We need to convince them that this is a good project for the taxpayers and the environment.”

Improving Salt Creek could save DuPage’s wastewater treatment plants — and the residents they serve — tens of millions of dollars.

That’s because the state monitors compliance with the Clean Water Act by doing surveys of water quality and aquatic life. If rivers aren’t meeting water quality goals, the state can impose additional requirements on the local wastewater treatment plants.

However, many costly mandates could be avoided if the county’s wastewater treatment plants pay for projects that improve local waterways.

The forest preserve, meanwhile, already has taken steps to modify and remove dams at Churchill Woods near Glen Ellyn, Warrenville Grove near Warrenville, McDowell Grove near Naperville, and the Preserve at Oak Meadows in Addison. 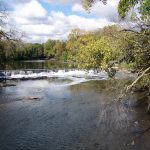